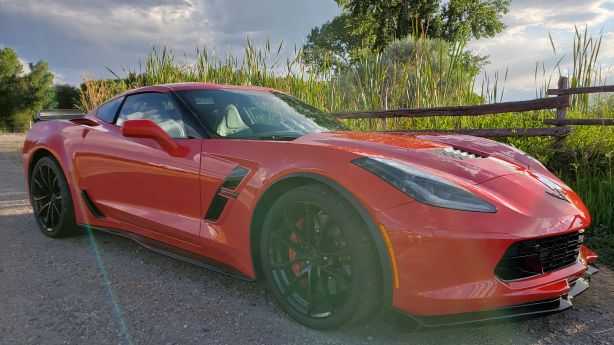 In 1953, only 300 were produced with fewer than 200 sold. With only 150 horsepower, the car failed to move fans of more lively British roadsters and refined American sedans.

A couple of years later, the original V-6 engine gave way to a more powerful V-8, and the Corvette began to find its way. The 1956 model brought styling changes and additional horsepower that laid the groundwork for what would become America’s sports car.

The second-generation car, dubbed C2, debuted in 1963 and offered a coupe option for the first time. That same year, the Sting Ray moniker made its mark, and Chevy began offering its first production racing model Z06 with 360 horsepower.

In 1965, Chevy made its big-block 425 horsepower V-8 available in the Corvette. The C3 (called the Sharknado for its unique design) was released just a few years later. According to true aficionados, the modern Corvette originates with the C3, since Chevy eliminated any true rear storage area and debuted a Targa-style removable roof panel.

In 2020, the Corvette will experience its most stunning transformation to date and become a mid-engine supercar, sharing a powertrain layout with European competitors for the first time ever.

Despite its rich history and reputation for power, the Corvette has been subjected to a messy, mixed reputation among car enthusiasts. America’s sports car is often viewed as a value offering for middle-aged drivers, and stories abound of Corvette engineers feeling limited in their offerings.

With the new car entering production, there is no better time to pay homage to the outgoing C7, which changed the Corvette’s reputation for the better. The 2019 Grand Sport model combines the power and value of the Sting Ray with Z06 styling.

“The Grand Sport has long been the best value in the sports car world. You simply can’t match what’s available, dollar for dollar, anywhere in the world,” said Zach Madsen, fleet sales manager for Ken Garff Chevrolet in American Fork.

The Grand Sport model offers the body kit and downforce stylings of the top-end Z06, and the car is stunning from almost every angle. The fastback-style roofline meets massive rear fenders that blend and create a rear end that makes the Corvette seem much larger than it is. When parked next to other cars, the ‘Vette’s true size becomes quickly apparent.

There is no mistaking this car for another from behind. The traditional quad lens taillights flank the huge Corvette emblem on the rear, and all four exhaust outlets are located at the center of the rear bumper rather than split among each side.

The Z06 rear deck spoiler is tall enough to require an opening in the center so the driver can see behind. The rear fenders are squared off more than prior generations, but the front fenders still provide a sweeping arc that screams Corvette. Large front fender air vents provide color contrast and sport the Grand Sport logo.

From the front, the hoodline rakes down sharply, stretching elongated headlight housings on either side. A black hood vent down the center and a three-tiered front splitter provide color contrast and make it seem like the car is floating just barely above the ground.

The ‘Vette’s best attribute, and my most pleasant surprise, is the handling. The beefier body and chassis of the Z06 is present on the Grand Sport, and buyers can choose the even beefier Z07 suspension package.

The word “compromise” has always been part of Corvette lore, and I didn’t anticipate a car that felt confident on nearly every road I threw at it. The C7 is a capable track car and most track-capable cars don’t make the transition well to the mean, uneven, pothole-filled streets of America.

I’ve been disappointed by some of the best cars in the world, where even the seams of an elevated canyon road can throw them every which way. The C7 Grand Sport, in my humble opinion, is only bested in this area by the Porsche 911. It’s a bold statement, but I stand by it.

The lore of “compromise” is true inside the Corvette, though. It isn’t fair, of course, to compare the interior of a sub $80,000 car to those of cars costing three and four times as much. It’s difficult not to, though, when Corvette competes for buyers with those cars from Italy and Germany.

There’s no doubt the interior is much improved over the prior C6 generation: nothing about the fit, finish and quality of the materials stands out as subpar. At the same time, nothing stood out as exceptional or distinctive from any Cadillac or Denali on the road. In a car like this, something should.

The two-tone dash layout is nice, and the cockpit-like feel of the driver’s seat is unrivaled. The entire center console pushes out toward the driver and ends on the lower passenger side with a grab handle for wary riders. The passengers will also find their separate climate and heated/cooled seat controls built into the passenger vent itself — a nice and convenient touch.

But Corvette tech is a mixed bag.

The heads-up display is excellent and adjustable to provide a wide range of information, and the center touch screen reveals a James Bond-like secret storage bin when lowered mechanically.

GM has an excellent MyLink infotainment system, but the Corvette seems to have been given a lesser model — though, the Bose sound system is superb. Perhaps the intent was to “enhance” the display so it would stand out from Chevy’s other offerings, but the result is a mess of poor layout and overlapping controls.

Fortunately, both Apple Carplay and Android Auto are available to rescue it.

I might lose some Corvette fans by saying this, but hear me out. The powertrain is excellent but left me wanting more.

While the Grand Sport borrows from the upper-end Z06 in terms of appearance and handling, it also borrows the engine and transmission from the base model Sting Ray. The 6.2-liter LT1 V-8 provides 460 horsepower and 465 pound-feet of torque and moves the ‘Vette from zero to 60 in 3.7 seconds with the smooth eight-speed automatic.

It’s quick, it’s gloriously loud at startup, and yet, it left me feeling like the experience was less than spectacular. Perhaps the C7 is a bit too refined for its own good. Perhaps Corvette engineers have favored the stereotypical mid-life buyer a little too much.

The glorious sound loses some luster at highway speeds. The G-forces are clearly there when moving that quickly, but they aren’t felt the way one would expect. The engine lacks initial “oompf” but makes up for it while the transmission spins through the gears in a way that seems impossible. The paddle shifters added some fun, and I’m curious whether the seven-speed manual transmission would “un-tame” the beast in the way I would want.

Don’t get me wrong, I prefer the Corvette to the wonky, jolting shift pattern of an Aston, and the handling more than makes up for any ethereal shortcomings. Best of all, it’s the first sports car I’ve brought home that my wife actually enjoyed riding in. She paid it high praise one evening with the light Targa top removed and actually said she could get used to this one.

In the end, the Corvette left me very impressed and quelled the mythical shortcomings that preceded it.

I doubt many potential Corvette buyers care, but the EPA fuel economy comes in at 19 combined mpg, aided by a less than 3,300-pound weight. The manufacturer’s suggested retail price for this car, as tested, was $77,840.

This site uses Akismet to reduce spam. Learn how your comment data is processed.